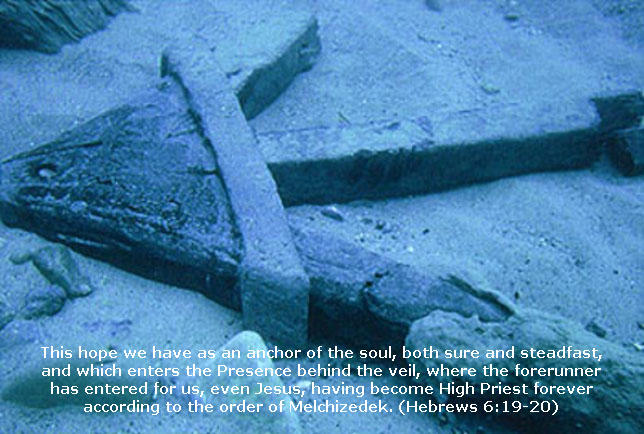 As much as I hate to admit it…. I forgot the boat anchor when my wife and I went fishing. Talk about a struggle to stay atop a school of fish, ‘and fish’ with a hand steered trolling motor! Whew!

You can just forget about stationary drop shotting. Needless to say, I found myself at the mercy of the wind and currents. Drifting about like a leaf on top of the water.

My mind was quickened to the fact that thousands of people are adrift in their lives without an anchor to hold them steadfast and on track to do God’s will.

Albeit, some do go to church for one hour a week and drop anchor with others and find some temporary rest and refreshment. Jesus can not do His greatest work in the storms of our lives if we only allocate Him one hour a week of shared fellowship.

Some might say, “Well I also pray each morning and evening!” To this I say, “It’s better than once a week. At least your anchor is within reach.”

Anchor (Strong’s 45) The Greek word for anchor is ἄγκυρα, ας, ἡ (agkura) Phonetic Spelling: (ang’-koo-rah) (agkura, Latin = ancora, an anchor) Ever since the Ancient Greeks the symbol has been viewed as a picture for hope.

An anchor is a heavy weight of stone, wood, and/or metal attached to a rope or chain and dropped overboard to keep a ship from moving with the wind and currents especially during a storm.

Ancient anchors were much like the modern ones with iron hooks to grapple the rocks. A vessel that is not securely anchored does not have much hope of riding out a violent storm. Without Jesus in the foremost center of our thoughts we have no hope in the face of temptations, hardship and storms.

I takes a lot more than just dropping anchor in church once a week!

Jesus must be the anchor that all your thoughts, actions, and deeds are filtered through. (Ephesians 4:20-24) But you have not so learned Christ, if indeed you have heard Him and have been taught by Him, as the truth is in Jesus: that you put off, concerning your former conduct, the old man which grows corrupt according to the deceitful lusts, and be renewed in the spirit of your mind, and that you put on the new man which was created according to God, in true righteousness and holiness.

In scripture, Hebrews speaks of an anchor which provides security as a safeguard of hope. This is a hope generated by faith in gospel which enables the believer to stand firm in the face of all the temptations, hardship and storms which pop up in the course of our lives.

(Hebrews 6:19-20) This hope we have as an anchor of the soul, both sure and steadfast, and which enters the Presence behind the veil, where the forerunner has entered for us, even Jesus, having become High Priest forever according to the order of Melchizedek.

Satan does his best to pervert, twist, deceive, tempt, and lie to us. Satan brings both sufferings and temptations in an attempts to draw us away from the Lord. (Matt 4:3) Now when the tempter came to Him, he said, “If You are the Son of God, command that these stones become bread.” (1 Peter 5:9) Resist him, steadfast in the faith, knowing that the same sufferings are experienced by your brotherhood in the world. (John 8:44) You are of your father the devil, and the desires of your father you want to do. He was a murderer from the beginning, and does not stand in the truth, because there is no truth in him. When he speaks a lie, he speaks from his own resources, for he is a liar and the father of it.

One of Satan’s ‘many’ perversions is to come to us as an angel of light. It is by having Jesus as our anchor of hope and truth, that we are made aware of his devices to deceive us. (2 Corinthians 11:14) And no wonder! For Satan himself transforms himself into an angel of light. (2 Corinthians 2:11) lest Satan should take advantage of us; for we are not ignorant of his devices.

There are many so called Christians that practice being weekend warriors. Those who only drop anchor once a week on a false Sabbath, and continue practicing religions instead of being ‘Christ – Like’ followers, true believers, and lovers of His laws; these false disciples will not be saved!

(Matthew 7:22-23) Many will say to Me in that day, ‘Lord, Lord, have we not prophesied in Your name, cast out demons in Your name, and done many wonders in Your name?’ And then I will declare to them, ‘I never knew you; depart from Me, you who practice lawlessness!’

To set Jesus and His word as your anchor is to know Him as the salvation hope of the gospels. To “know” means more than just knowing facts about Jesus or the Word (Bible), it “denotes a relationship.”

Even though “the many” performed miraculous feats, Jesus calls them “workers of lawlessness.” All their religious activity was ‘merely a false facade’ on a life fundamentally opposed to do the will of God.

What shall we say then? Shall we continue in sin that grace may abound? Certainly not! How shall we who died to sin live any longer in it? (Romans 6:1-2)

Satan and his fallen angels have successfully deceived the entire world into joining him in a false form of religion (Revelation 12:9). These are the religions which ignore the truths found plainly in the bible; instead seeking to bend or twist it as a compromise. Intended on abusing the Laws of the Old Testament in lieu of the grace of the New Testament only. (Jude 1:4) For certain men have crept in unnoticed, who long ago were marked out for this condemnation, ungodly men, who turn the grace of our God into lewdness and deny the only Lord God and our Lord Jesus Christ.

Set Jesus as your Anchor NOW! Then teach others to do the same.

You will keep him in perfect peace,
Whose mind is stayed on You,
Because he trusts in You.
Trust in the Lord forever,
For in YAH, the Lord, is everlasting strength.

Is Jesus really your Anchor?